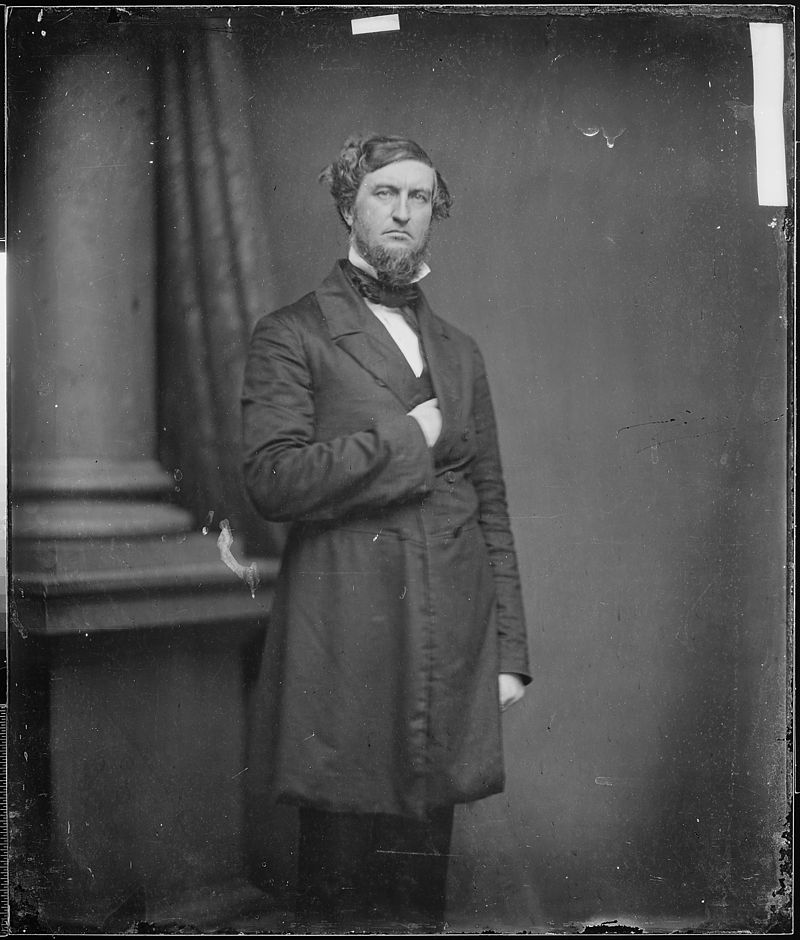 “without a little bloodletting this Union will not, in my estimate, be worth a rush.” – Zachariah Chandler, U.S. Senator from Michigan1

According to his Civil War Diary, Edward Henry Dickerman listened to a speech by Michigan Senator Zachariah Chandler on July 23rd, 1861. The men of the Michigan 3rd Infantry volunteers had just covered the retreat of the Federal troops from the first Battle of Bull Run. In Edward’s words, “We retreated back to Washington whiped but not badly.”

Senator Chandler “made us a little speech and shoed us that we had not disgraced our flag.”

Zachariah Chandler was a vocal abolitionist and stood in firm opposition to slavery. He served as Mayor of Detroit and ran for Governor of Michigan in 1852 as a member of the Whig party. Later, he was instrumental in forming the new Republican Party and helped found the state GOP in Michigan. Chandler became a U.S. Senator and served from 1857 to 1875.

Never afraid to stand up for what is right, Chandler was a fierce anti-slavery advocate and opposed compromise with the Southern secessionists, even at the cost of war. Chandler declared “without a little bloodletting this Union will not, in my estimate, be worth a rush.”

According to a short biography2 of Zachariah Chandler, “When war came, he helped organize and equip the first regiment of Michigan volunteers. In the Senate he obtained a position on the powerful Joint Committee on the Conduct of the War, which exerted pressure on the Lincoln administration for a more aggressive war policy and harassed cautious or conservative Union Army generals, especially George B. McClellan. Chandler was also chairman of the Senate Committee on Commerce; he promoted the passage of measures creating a national banking system, higher tariffs, and other legislation to finance the war and aid Northern industrial growth. He was critical of Lincoln’s moderate conditions for restoration of the South to the Union and bitterly opposed to Andrew Johnson’s Reconstruction policy. A roughhewn, grim-visaged, hard-drinking, plain-speaking man, Chandler denounced Johnson as a traitor and voted for the President’s conviction on impeachment charges in 1868.”

In his final speech given October 31, 1879 on the night of his death, Zachariah Chandler spoke about many topics of political concern in his day. Among these comments Chandler talked of the “Twelve members of the Senate – and that is more than their whole majority – twelve members of the Senate occupy their seats upon that floor by fraud and violence…” and “With majorities thus obtained they dare to arraign the loyal men of this country, and say they want honest elections” to which there was much laughter and applause. “They are mortally afraid of bayonets at the polls.”

He goes on to state the when offered “a law forbidding any man to come within two miles of a polling place with arms of any description” the Democrat Senators “promptly voted it down, for they wanted their Ku-Klux there.” “They were afraid, not of Ku-Klux at the polls, but of soldiers at the polls.”

“What they want is not free elections, but free frauds at elections.”

My, how history repeats itself. Just as in the 1860’s and 1870’s when Democrats refused to allow inspections at polling places, today’s Democrats do everything within their power to thwart election inspectors. They obfuscate poll watchers, stuff drop-boxes with fraudulent ballots, delay and alter actual election results and accuse anyone questioning the results or methods of today’s elections as “threats to democracy.”

Certainly with the advent of electronic tabulators and computer software that cannot be easily traced, their methods have changed, but today, as in the past, what they want is not free elections but free frauds at every election.

Perhaps it is time once again for a little bloodletting.